Kyiv as a Function: Ukraine’s Capital in the Photographic Narratives of the Russian Empire and the USSR

Historian Gennady Kazakevych tells how Russian imperialism has shaped the image of Kyiv and its status as the "mother of Russian cities" for decades.

In the popular Soviet comedy “Kidnapping, Caucasian Style,” there was this episode: comrade Saakhov, a character representing a cunning and hypocritical official from the national periphery, teaches a naive but honest student, Shurik: “Everyone knows that the Kuzbass is an all-Union smithy, Kuban is an all-Union granary, so the Caucasus is an all-Union what?” “Health resort [Zdravnytsia],” the young resident of a typical Soviet city automatically replies. He is immediately corrected: “The Caucasus is an all-Union smithy, health resort, and granary.” The comic effect of the scene relates to the violation of the normative order, according to which each part of the empire had a clearly defined role in the system and could not be self-sufficient. Within the system, Sevastopol was the “city of glory of Russian sailors,” Donbas — the “mining region,” and Ivanovo — the “city of brides.”

Kyiv, according to this system, was the “mother of Russian cities,” the first semi-mythical capital, “returned” to the bosom of the Russian-- and later—to the Soviet world.

Empires are always about classifying and creating hierarchies. Disordered territories should be given a proper function and a “high” culture while their exotic populations, natural environments, and architecture should create a bright background for the majestic state. Since ancient times, literature and sculpture served as the main tool for such classification. In modern times, these tools also included engraving and maps, and, since the middle of the 19th century — photography. Landscape pictures, available widely to the public, with a clear reference to the terrain, helped transform abstract geographic representations into a systematized narrative.

Kyiv was lucky enough to be caught on camera earlier than most European cities. In 1847, Tsar Nicholas I commissioned a British engineer, Charles Vignole, to build a chain bridge. To document this ambitious project, Vignole hired the artist and photographer, John Cook Bourne, who was later joined by Roger Fenton (he would soon become famous for his military photo reports from the fronts of the Crimean War). Thus, due to English technologies, the first-ever photographic images of the Dnieper banks and Kyiv churches appeared.

Twenty years prior, the Minister of Education Sergei Uvarov formulated the basic principles of Russian state ideology: Orthodoxy, autocracy, and nationality. Kyiv played a key role in this triad since it was here that the Prince of Kyivan Rus introduced Eastern Christianity. It was also here that the medieval monarchy was born, uniting the “triune Russian people,” which, in the minds of Moscow and St. Petersburg intellectuals, comprised “Great Russians,” “Little Russians,” and “White Russians.” Kyiv’s ancient ruins and monasteries, which attracted tens of thousands of pilgrims every year, officially came to be considered the sacred center of the “Russian World.” Kyiv photographers, who created valuable albums commissioned by the Romanov family and other members of the elite, tried to faithfully capture this image.

The subjects of the early landscape photos of Kyiv were quite common. They included panoramas of the city and the Dnieper banks, as well as the most important religious and public buildings: the Kyiv-Pechersk Lavra, St. Sophia Cathedral, the Church of the Tithes, St. Andrew’s Church, the monument to St. Volodymyr, and the university named after him. These photos depicted Kyiv as a patriarchal and lifeless city-museum, where people were rarely seen. This could be partly explained by the lack of photosensitivity of photographic materials. The major reason, however, was that, according to the aesthetic values of colonial-era Europeans, keeping human figures small served to emphasize the splendor of the building. Even better, the absence of human figures removed any distraction from fully admiring the beauty of the past or the stereotypical exotics of the imperial periphery. Photographers strived to find the highest possible shooting point to capture the widest possible scene because it was the viewer who should dominate the stage, while the images served the intellectual desire to classify cities and territories.

Pompous and, therefore, trivial urban photographic landscapes prevented the viewer from seeing the real Kyiv, a multicultural center where life was booming and which was shared by Ukrainian, Polish, Jewish, and Russian communities.

In the second half of the 19th century, Kyiv became a leading center of sugar trade; the city developed rapidly and experienced a construction boom, infrastructure modernization, and an influx of migrants, many of whom came from Western Europe.

Professional photographers, who belonged to the educated middle class, contributed to this period of modernization. Their desire to show elements of the modern city was reflected, for example, in Franciszek de Mezer’s albums of landscapes, in which, along with the standard set of monuments of Orthodox antiquity, we can see elegant parks of suburban villas, lively river vessels, new buildings, carriages, and figures of passers-by in the streets.

In 1869, the first postcard was created in Austria. It became an important technological advancement that allowed people to exchange short written messages and images. In Western Europe, postcards with landscapes of overseas colonies and their inhabitants, as well as landscapes of cities, became popular — Europeans sent them home during their travels. Such postcards were collected and exchanged, largely shaping perceptions about ​​peoples and cultures. Photographers creating the postcards focused not only on ancient monuments but also on what was considered fashionable and modern at the time.

The coexistence of Kyiv as a “city of shrines” and a “modern city” can be observed in its postcards, which were printed in large numbers by the Moscow publishing house “Scherer and Nabholtz,” as well as by Kyiv photographers Dmitry Markov, Andrew Gudshon and Olexandr Gubchevsky. Markov’s postcards are especially typical. His vision of Khreshchatyk and other central streets of Kyiv presents a cosmopolitan view of the “flâneur,” namely a middle-class man leisurely strolling through neat streets and attracted to respectable establishments and other flâneurs like himself — well-dressed men and women.

This splendid facade, however, prevents the viewer from seeing the city as depicted through the memories of contemporaries and family photo albums. We do not see the Kyiv of workers’ suburbs and bazaars, where rural and urban cultures met. Indeed, half of Kyiv’s population comprised Ukrainians and Jews, mostly poor and humble. It is noteworthy that the postcards of showed almost none of the “population types” — portraits of city or countryside residents in typical clothes. The postcards of “types” could depict Parisian women dressed in the latest fashion, alpine shepherds, or peasants in embroidered shirts from the Poltava region. Kyiv “types” were a rare exception, such as a portrait of a blind kobzar from the series of the “Scherer and Nabholtz” postcards. In the “best” colonial traditions, indigenous people either remained invisible or were used to create an exotic flair within the periphery pioneered by metropolitan culture. 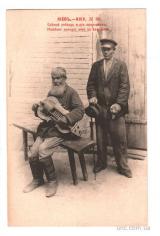 The first decades of Soviet rule added nothing new to Kyiv’s visual narrative. At that time, postcards lost their role as a means of communication, and hence, urban photography stagnated. Only after World War II did the genre of the urban landscape on postcards gradually return. Contemporary color cards, despite all the attributes of a postcard, were no longer intended for sending by mail. They were sold in sets to commemorate the visit to someplace on the Soviet map. Each set offered a complete visual story of a Soviet city rapidly developing after the horrors of war.

These stories demonstrate how the ideological climate in the Soviet state changed. Here on the table, in front of me, I have a series of Kyiv postcards, created by the Moscow publishing house “Progress” in the early 1960s. Of the 32 postcards, only three depict the “city of shrines” relics — images of St. Sophia Cathedral, Kyiv-Pechersk Lavra, and the imperial monument to St. Volodymyr. The angles were chosen so that all these remnants of the past look like elements of the landscape. On the contrary, the postcards showing young, well-dressed passers-by against the background of metro stations, new residential buildings, trolleybuses, and private cars attract the most attention. The photographer used close-ups, thus demonstrating clothes and sometimes even facial features in more detail. There is no doubt that these are happy Soviet people whose moral guidelines include monuments to Lenin and Pushkin (mandatory attributes of the space pioneered by Russian/Soviet culture), Shevchenko and Franko (national poets positioned as part of “all-Russian” and communist discourse), Bohdan Khmelnytsky (the personification of “Ukraine’s reunification with Russia” and struggle against the “West”), and the “red” commanders Shchors and Vatutin.

As Khrushchev’s cautious liberalization was rolled back, Soviet visual narratives gradually returned to forgotten imperial standards. This is especially noticeable in the photographs of Rostyslav Yakymenko, who, in the 1970s and 1980s, created photographic images of the cities of Soviet Ukraine, from Lviv to Donetsk. In his pictures, as well as in the works of his colleagues, the techniques of the first Kyiv photographers of the imperial era strangely emerged from oblivion. Again, the view from the highest shooting point dominates, while people and transport turn into tiny figures that emphasize the scale of the scene. Small people walk amidst the large public buildings and come to honor the monstrous Soviet monuments. The photographs’ subjects also change: churches and monasteries of the “mother of Russian cities” increasingly reappear in the postcards, accompanied by monuments related to the “Victory in the Great Patriotic War” — a new quasi-religious cult particularly promoted in the last decades of the USSR.

Today, all these cards, despite having become a part of the past, perfectly fulfill their primary discursive role. They deprive Kyiv of the elements that are undesirable for the Russian-Soviet narrative, depicting instead the Empire’s successful modernization of Kyiv as the ancient sacred center, where “everyone lived peacefully together,” especially from the perspective of a young Komsomol member on a three-day trip from Moscow. Now that he has grown up, the sudden “loss” of the city, which performed its well-defined function within a single-state body, has become a source of moral trauma, the trauma that the current Russian leadership has decided to “treat” with the war of aggression.