Imperial Soviet Narrative in Architecture and Urban Planning, and Politics of Colonization

Svitlana Shlipchenko, director of the Urban Studies Center, talks about the colonial policy of the Soviet Union in architecture.

“My address is not a house or a street, my address is the Soviet Union…” Back in the day, every radio would occasionally play this cheery song. Designed by its author to “characterize an entire era,” this song was written in 1972, that is, at the peak of Brezhnev’s stagnation period. That time was characterized by multiple things, such as the contradictory combination of the “age of Soviet consumerism” and total scarcity, with huge lines to get basic goods. At the same time, one of the most striking manifestations of the make-believe “Soviet prosperity” was the vast amount of housing, which was built annually by construction plants for the Soviet people using prefabricated reinforced concrete, based on standard projects. “Stalinkas” (1950s), “Khrushchevkas” (1960s), and “Brezhnevkas” (1970s and 1980s) were named after Soviet leaders at the time: impersonal standard houses, standard buildings, standard residential districts, city centres, squares, cities, and towns that were meant to house standard Soviet people who would consider the USSR to be their homeland, replacing the Russian Empire.

Everything was like in this one old Soviet film from the 1970s, where the protagonist is an average Soviet man, who has a lot to drink and then ends up in St. Petersburg instead of Moscow at 3 Stroiteley Street, which happens to be his exact address, and finds himself in a completely identical house and flat with identical furniture and wallpaper.

It would be fair to say that standardized planning is by no means a Soviet or Russian invention. And the colonization policy and, accordingly, expansion-development-construction had long relied on the unification of planning techniques and the transfer-implantation of cultural matrices in new territories.

Greek colonies of ancient times were planned with the help of the Hippodamian system, in which the streets, intersecting at right angles, formed a kind of grid. Another name for this system is the colonial system. Rome, on the other hand, managed to introduce the so-called urban planning standard. Apart from the ideological component (recreating the “image” of Rome in the controlled territories, subjugating them symbolically, but also dragging the “neophytes” to the Roman lifestyle), it contained a big functional one (the typology of spaces and functions): every city had its own forum with a mandatory set of public buildings, basilicas, temples; a system of streets with residential buildings; thermae; entertainment venues, such as a theatre, circus, and racetrack; and a complex system of engineering structures: aqueducts, viaducts, roads, etc. Like “all roads led to Rome,” the entire urban planning activity was centralized and quite heavily regulated by the state. In the 16th century, the first Laws of the Indies summed up the classical experience and offered a planning ideology and tools for the Spanish Empire’s colonial expansion. The Plaza Mayor is at the heart of many cities in both the Americas and the Philippines: it is of standard size, with a mandatory set of public buildings, from which streets are laid out using the same “colonial grid.”

The Russian Empire’s urban planning policy at the end of the 18th century and in the 19th century was characterized by heavy centralization, regulation, and typical urban planning and construction plans (by the way, Napoleon’s France had similar processes at that time). This meant, for example, that the plan for developing the administrative centre of a newly formed province and the classicist Round Square (photos 1, 2), then named after Russian emperor Alexander, in the Ukrainian city of Poltava was developed by Russian architects Mikhail Amvrosimov and Andriyan Zakharov and was approved in St. Petersburg, the empire’s capital then. Most houses surrounding the square were meant to be built using typical plans of “model buildings for province cities” developed and approved in the empire’s capital. The Ministry of the Interior’s Building Committee was in charge of the empire’s design and urban policy. The committee was chaired by William Heste, known to Kyiv residents as the author of the never-implemented project to reconstruct Kontraktova Square in Podil, where the Guest House (Hostynnyi Dvir) was supposed to become one of the key objects (photos 3, 4), created according to a standard plan by another Gastarbeiter architect, Luigi Rusca. Furthermore, Heste developed numerous master plans for Russian Empire cities, from Ukrainian Cherkasy (photo 5) and Katerynoslav (currently Dnipro, the city that used to be named after Russian empress Catherine II) to distant Russian Omsk, Penza, Smolensk. And, of course, the “colonial grid” could be traced in all of these plans.

In 1917, an unprecedented transformation project, the USSR, began in the former Russian Empire. There was an urgent need for this kind of camouflage formation, the unified collective identity of the “Soviet person,” a new builder of the perfect society. The modernization policy of the USSR, industrialization + collectivization, added a certain site specificity to the global urbanization trend (due to hundreds of thousands of peasants, escaping from collective farming and famine, flowing to old and new industrial centres) and sort of “processed” the ideas of functional, accessible, economic mass housing, developed by modernist architects of the German Bauhaus in the 1920s-1930s in a rather peculiar way.

This culminated in the Soviet interpretation of the standard “residential cell” (minimal living), which, unfortunately, was inadequate in terms of technology, but rather served to manage, control, and standardize individuals’ lives. The ideas of technologization and standardization of life processes are reflected in the relevant terminology: housing cell, housing/food centre/factory /kombinat, children’s centre//factory /kombinat, social condenser, etc. (One such example is the town/district of New Kharkiv, a utopia social town built for the employees of the Kharkiv tractor factory.)

Overall, the idea of urban planners was not just to design the city itself but rather to organize it around one or several industrial enterprises — the so-called city-forming factors, such as factories, power plants, seaports, and so on. It would be wrong to say that the functions of districts/spaces in Soviet cities — industry, housing, recreation, transportation, etc. — were significantly different from the provisions of the Athens Charter, the main conceptual paper of Western modernist architects, but it was all strictly regulated in Soviet urban planning documentation. Soviet urban planners transformed the American idea of neighbourhoods, turning them into a series of mass-produced boring districts.

The huge migration processes within the USSR contributed to the fact that yesterday’s peasants lost touch with tradition, their cultural identity and “their own place”, as if given the opportunity to start life from scratch. According to some estimates, up to 50 million people took part in the numerous instances of “building communism”, uprooted people dragged through the vast territory all over the place, not counting those in totalitarian regime’s concentration camps. In other words, the national and cultural population diversity of a vast state, forcibly formed from very different national republics, was neutralized, in part, by this standardized urban space. The policy of mass construction — replicated unified public buildings, urban centres, and districts with monotonous (though with some climate variations) standard buildings — gave rise to innumerable “clones” all the way from the Dnipro River to the Pacific.

State policy in the field of urban planning was based on regulating design and construction. It is about USSR building standards and rules; the unified production of   building materials and parts; a chain of construction plants; and rigid centralization of construction activities. This urban planning and design policy was provided by the Moscow State Construction Committee, a regulatory “Union-Republican” agency, and a chain of design institutes across the country that developed standard projects and master plans for cities and towns, such as Kyiv Zonal Research Institute of Design (KyivZDNIEP), where the “zonal” referred to the zone of “Ukraine, Moldova, and the Caucasus.”

“Abstract Moscow could be seen in a crack in the aberration haze, and the West stretched beyond it. Everything was sent to Moscow for approval, the ‘response from heaven’ was expected from there as well,” aptly commented Odesa artist Leonid Voitsekhov in the 1980s.

Centralization also applied to architectural education and activities. In addition to teaching in Russian, only a very few translations of works by world experts were published in Russian, local unions were subordinated to the colonial Moscow centre, and the same “centre” determined (and usurped) the policy of communication with foreign colleagues. The opportunity to attend international congresses and conferences or to participate in trips for exchanging experience was mostly available to architects from Moscow and single representatives from local architectural communities (and the lists were approved in Moscow).

In parallel with the mass construction of housing, new types of buildings were introduced (also mainly according to typical designs): houses of culture (called “social condensers” in the 1920s), residential houses, covered markets, houses of district party/communist centres, etc. Therefore, the physically present structure of the “controlling institution” (type of building) — school, plant, residential building, or culture house — made its contribution to erasing the boundaries between the private and the public, forcing individuals to adapt and dissolve in a new environment, and creating a collective identity of a Soviet person: a person without a house and a street with the Soviet Union indicated as an address. As for the practice of using the so-called “national style features,” in particular, for decorating facades and interiors, it looked only like local exoticism — entirely in the colonial spirit, a makeover for already ideologically marked structures.

“We are faced with the task of developing questions of national form and forming the Soviet architectural style of socialist realism. ... Here [in Kyiv], samples of Ukrainian Soviet architecture will be created,” wrote Volodymyr Zabolotnyi, a representative of the Ukrainian architectural establishment, in 1953, and, in parallel, an MP of the puppet Verkhovna Rada [Parliament] of the USSR.

At the same time, large-scale erasure — destruction — of architectural monuments of the past was practised; a particularly active phase began with the Leninist plan of “monumental propaganda,” when monuments and memorials of past epochs were massively destroyed or repurposed (especially those relating to Ukraine or religion), and monuments to the heroes of the Soviet pantheon and events of the Soviet interpretation of history were erected. Hundreds and thousands of central squares in cities and towns come to mind here (photo 6) with the obligatory figure of Lenin, often covered with “silver” or “gold” paint for preservation from weather influences; houses of district/regional committee (centres of central control, equivalents of palaces of governors of the colonial era); a house of culture or regional theatre (in the Laws of Indies, this place was occupied by the structure of the Catholic Church); a department store (instead of a market); etc. There is an interesting detail: in the square of each village, evergreen trees were planted next to the “settlement of power,” apparently clearly implying the “eternal” order and the same unchanging nature of power represented by these spaces. 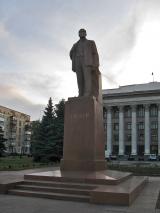 However, after years of standardized construction, the system had come close to its critical limit in the late 1970s: architects began to acutely feel the loss of their authority, while residents, instead, slowly began to express dissatisfaction with the monotony of sleeping blocks. There was a growing interest in things such as preserving historical heritage and interest in local contexts and traditions. A period of tectonic changes was approaching.

In recent years, architects, planners, and, of course, citizens (local communities) — in fact, all those who live in Ukrainian cities and towns where the Soviet urban heritage is still present — have begun to reconsider their connections actively with the “place,” histories, and to look for ways to reveal their local identity. There are successes on this path, despite some failures (for example, the Centre for Contemporary Culture in Dnipro and MetaLab in Ivano-Frankivsk). The reform of self-government only reinforces these searches, but there is still a long way to go.