Not Just the Environment. What We Talked About at the Third Green Academy

The Green Academy is a one-week school for adults who figure out together how to make their life and community greener. I.e. how to reach gender equality, take part in decision-making, reduce the impact on the environment, and communicate with others in a way that no one gets hurt. Already the third week-long summer school took place in August 2020 with 20 civil activists, female researchers, and media professionals taking part. You can read about the first two summer schools here and here. In this article we talk about the interesting things that happened this year, why even introverts appreciated this summer school, and how green values — seemingly abstract at first glance — are related to real life.

Not only nature is green

A society can be called “green” if it uses resources wisely, every person is respected regardless of their gender, and everyone can make decisions on equal grounds (or at least get involved in the process of decision-making). There is no discrimination and inequality in such a society, and everyone’s opinion is taken into account. This is not a utopia. All of these principles can be applied, from your daily routines to changes at the state level. However, one should know how to apply them.

In fact, the Green Academy is a kind of space for discussing how values which seem to be distant and way too idealistic can be introduced into the Ukrainian reality, which doesn’t always welcome this, and whether one person alone can do it.

During one week female and male participants lived in a mini-version of a green society. The summer school took place not far from Kyiv. Owing to the quarantine lectures and discussions were held on a meadow in the midst of a forest. Participants were recycling and trying not to produce excessive garbage, everyone had the space and opportunity to speak up (if s/he wanted), propose their topics for discussion, share their experiences and adopt the experiences of others. Since the summer school coincided with the pandemic, the programme included quarantine rules: all participants had to take a PCR test, keep a social distance, and disinfect everything they touched. 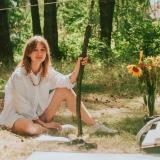 “The most unexpected thing was that the Academy did take place. The pandemic summer was unsettled and vague, and I’m glad I had the opportunity to take part in an offline event — the kind of event that I won’t experience in the near future,” says Anastasiia Bobrova, academy participant and analyst of the CEDOS think tank.

The daily programme included several lectures and discussion sessions. Each day was dedicated to one topic, namely, how to establish social justice, preserve the environment (or what remains of it), introduce participative democracy and gender equality in your own family, organisation, and town, and scale it up to the level of the state.

How things are connected and interrelated was a core topic of all the discussions. For example, we talked about how tolerating sexist jokes in a company of friends leads to fewer women in power, or why the school curriculum is crucial for the likelihood of bicycle infrastructure projects to be voted for in the Verkhovna Rada (Ukrainian Parliament). 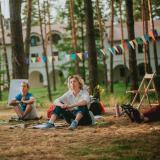 “Gender and environmental components of the Academy have significantly added to my knowledge. I lacked a complete picture, although I’ve really been interested in these issues for a while. Now I see some cross-sectional connections and patterns more clearly. For example, I notice how gender inequality correlates with environmental and economic ones. Also, the part dedicated to the participatory approach was very relevant to me — this tool may be of use in today’s museum,” says Hanna Rudyk, director of educational programmes at the Khanenko Museum.

She adds that in her work, participation, i.e. involving different people in decision-making, is the shortest way to healthy changes, although it is not always easy, “There is always a dilemma whether to offer something for discussion or development to colleagues or to do it quickly by myself. Delegating power and responsibility is sometimes extremely difficult since it requires a lot of patience and even courage. But now I know that this is about the fair competition of ideas and that macro-social ideas can be implemented at the micro-level of the museum.”

Like any other tool, the participatory approach should be applied wisely, adds analyst Anastasiia Bobrova. She works with the topic of urban development and explains that the participation of different people in the decision-making process is the key to a fair and comfortable city.

“I liked the idea expressed at the Green Academy that participation is a value that can be practiced in personal life, work, and at the state level rather than being a mere tool,” explains Anastasiia.

The Green Academy was a space where you could dive into one topic and then go deeper. 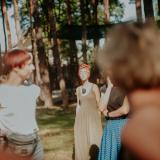 "I could stop and think deeply about one thing," says participant Daria Kryzh. “Usually I just don't have time for that. I also had to step out of my comfort zone all the time. I am an extrovert out of necessity, so teamwork is difficult for me, but I had to put aside my habitual patterns and adapt to the preferences of the team and realise how important it is to be a part of the whole or vice versa, to be separate from the whole. It was both difficult and cool at the same time.” 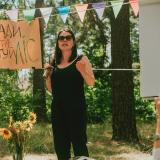 “The Academy made me reinvent some of my ideas, in particular eco-friendliness. I clearly understood that solving the problem of pollution should be a political decision that countries must reach synergistically. It was a revelation for me that environmentalism is becoming a new political ideology,” said Iryna Zemlyana, media expert and participant of the third Green Academy.

She adds that even discussing the topics she was more or less aware of helped her to reinforce her views or look at them from a different perspective. For example, she sometimes used to doubt whether she was really a feminist since there were more radical ones around. It turned out that feminism is not binary and may come in different forms.

“The Academy was very relevant and timely. Despite the pandemic, we felt secure. I especially loved the food, because for me as a vegetarian, it was almost the first time I could eat everything instead of constantly looking for suitable food. I’ve kept especially warm memories about our evening gatherings. And I got a new female friend, although they say it is difficult to make friends when you're an adult. The Green Academy helped with that,” adds Iryna.

Next year, if the world does not fall apart, the Green Academy will take place again. Information about new enrolment will be posted first of all on the school's official Facebook page and on the Foundation website. You can read now about the selection process and practise the previous year’s testing tasks. For example, make an action plan in case your event is disrupted by opponents. Spoiler: these exercises can inspire more than one real project on social justice, gender equality, or climate change.

How We Lived in a Green Society for a Week: the Second Green Academy

Report
The second Green Academy — a summer school on strategies and principles of German Green democrats — took place between June 30 and July 7.
By Марія Матяшова