On the second day of the Forum, a Workshop of Climate Justice took place, with the participation of Oksana Aliieva, coordinator of the Climate Change and Energy Policy program in our Foundation. Here are some notes of what Oksana talked about. You can also check out the video of her presentation (in Ukrainian).

In the West, the concept of climate justice is common, yet in Ukraine, it is only emerging. In English, justice is not only a general concept; it also has a legal meaning. We use this word both ways.

When we speak about justice, we understand it in the broadest way. For instance, the Ukrainian movement UAnimals is very popular because it resonates with you — it makes you see the injustice to animals who cannot defend their own rights, so we have to do it for them. People, too, don’t always have the possibility to defend their rights, so in our work, we have to consider social justice, as climate change affects people as well.

Like the Earth and its resources, people have a lot of value. We have to find the balance between the humankind and the planet and live in peace. To do it, first of all we have to take care of the rights of the most vulnerable demographics.

In this 2017 map, you can see the countries with the biggest volume of per capita CO2 emissions painted dark — North American and other developed countries. These are the very countries that have contributed to climate change the most.

In the next map, you can see the assessment of likelihood of climate change consequences: agricultural losses and food security issues, escalation of extreme weather phenomena, an increase in the number of droughts, etc. If we compare the data with the previous map, we will see that the countries causing the least emissions are at the biggest risk.

The global injustice in terms of climate change starts right from the fact that the very countries that contribute to climate change the least, consume the least resources, and emit the least greenhouse gasses are the ones suffering the most from climate change. The same principle works on the local and individual levels.

The Consequences of Climate Change and Who Suffers the Most

Speaking about territories, let’s start with the global sea level rise. According to forecasts, by 2050 the territory of Europe will be partially submerged.

Furthermore, last year EcoAction published a study Water is Coming about the sea level rise by 2100, which will submerge some of Ukrainian cities and towns.

Who will be the first to suffer in these towns? The poor — because they won’t have money to leave their home, move elsewhere, buy a place to live and maintain the same standard of life. Another at-risk group is disabled people. Partially, it is caused by the social injustice in Ukraine: disabled people are poorer because they don’t have the same opportunities as able-bodied people do (a good job and wage). Climate change is unpleasant in that it makes social inequality even more acute.

People suffering from cardiovascular diseases have a hard time during heat waves in cities, since their heart feels more of a strain when it gets hot and complications become more likely. This also goes for people who suffer from lung diseases, since climate change is caused by greenhouse gasses, while greenhouse gas emissions are often accompanied by other types of pollution.

Children, too, feel the impact of climate change. They cannot adapt, they don’t have their own resources to change anything or an opportunity to make a decision about a move to a different country or area, since they completely depend on adults.

The elderly constitute yet another at-risk group vulnerable to climate change because in Ukraine, they are poorer than middle-aged people who have jobs and salaries. The pension system in Ukraine is imperfect, and the standard of elderly people’s lives is not as good as we would like it to be.

We should also note gender inequality here because in Ukraine and in many other countries in the world women have less access to resources, are paid less and often have to take care of children and elderly family members. They become dependent and do not have enough resources to adapt.

If we look at the statistics in Ukraine, women are more often responsible for household accounting and paying the bills. This makes them more likely to pay attention and save resources, as they see how much they pay for them. Another study shows that women reinvest up to 90% of their income into their household, unlike men, who reinvest only 20%. This shows that those who cause climate change less, since they consume more economically and use fewer resources, have fewer opportunities to improve the situation and adapt.

This year, Amnesty International joined the Global Climate Strike. They prepared an infographic about how climate change affects the observance of human rights. 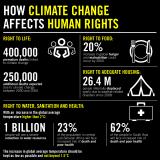 When we say we have to fight climate change, reduce greenhouse gas emissions and adapt, we are talking about the Earth, the nature, the biodiversity. But yet another reason to care about it is people — the social capital of the humankind. All people on the planet have a right to a worthy life, and that is already worth fighting for.

According to the report of the UN Intergovernmental Panel on Climate Change, which compared the scenarios of global warming by 1.5°C and 3.5°C by 2050, if limit global warming to 1.5°C, we will be able to:

—    reduce the number of people vulnerable to the risks connected with climate change and poverty by several hundred million;

—    reduce the number of people worldwide suffering from water shortage by 50% (to 1 in 25 people);

1.5°C global warming is our opportunity to build a world where the infrastructure will be more socially fair, and the consequences of climate change will affect people less.

If we speak about the transition to renewable energy sources (RES) as one of the tools to maintain the temperature growth within the 1.5°C limit, we have to think what kind of RES they are going to be; who should own this infrastructure; what role women will play to be involved in the energy sector (since as of now the level of women’s engagement in the energy sector is very low both in Ukraine and globally); how transport infrastructure will develop to be more socially fair and accessible for disabled people, etc. That is, if we have to rebuild the infrastructure either way, we have an opportunity to make it not only climate-friendly, but also more socially fair.

How Can We Adapt to Climate Change Now?

Urban areas should be made greener. By planting more greenery we can also make urban infrastructure more friendly to people with children who tend to spend time outside. It is also going to help the elderly to adapt, since it will make their life in the city more comfortable.

If we look at regular Ukrainian villages, the things that people have grown in their vegetable garden are basically the things they end up eating because they don’t have access to jobs which would bring them income and enable them to buy food from the store. In rural areas, there are fewer people than in the cities, and they grow many foods by themselves. Manifestations of climate change can affect their access to agricultural products and the conditions in which they have to grow their nourishment.

What we can do now is take measures to adapt to climate change (such as drip irrigation systems) and conduct research on what plants should be grown in Ukraine and which of them will survive in a hotter weather — the steppe part of Ukraine is already suffering from unforeseen droughts which affect local agriculture.

In Ukraine, people who live in villages tend to have lower income than those who live in urban areas. This motivates people to move from rural areas to cities and contributes to the growth of urbanization. Thus, adaptation to climate change will help to avoid the increase in the gap between the rich and the poor and the deterioration of one’s social status.